Get a Free Estimate

Initially three separate educational sites, LSST, Witham and City of Lincoln College (incorporating The Ruskin Academy) merged together to create the Priory Federation of Academies. Overseen by Balfour Beatty, the combination of new build and refurbishment projects is one of the final government Building Schools for the Future programs and also the largest single project Metrotile UK has been involved with so far. Once completed, the various roofs of the Priory Academies will feature over 50,000 Metrotile tiles in total.

The Priory LSST hosts a population of 1700 pupils and also features a Sixth Form College. Rated by Ofsted as ‘Outstanding’, LSST is an institution synonymous with quality. Like its sister campuses City of Lincoln College and Witham Academy, LSST is currently in the second phase of a two phase development program. Initial buildings were completed by September 2010 featuring over two thousand Metrotile Bond profiles in Brindle.

The remaining 4000 profiles will grace the remaining buildings with Metrotile Bond in red and will be installed by the end of March 2011. The Priory Witham Academy was subject to a major renovation and new build program that had to run during term time.

So that school life wasn’t disrupted, a new building was built on the expanded grounds. Once complete, the pupils were moved into the new building, as the old one was knocked down and another new building built in its place.

Due to the time constraints imposed by undertaking such a large project during term time, Balfour Beatty and roofing contractors Dodds Roofing required a roofing material that offered unmatched durability and security, yet could be installed rapidly. For Dodds Roofing, there was only one choice; The Priory City of Lincoln College is also within the second stage of a two-phase development, the first of which was completed in Summer 2010 with the second due for completion in Summer 2011. Once complete, the site will be adorned with 8000m2 (16000 profiles approx) of Metrotile Lightweight Steel Roofing.

Graham Dodds, Managing Director at Dodds Roofing said “Dodds Roofing has worked with Metrotile’s roofing systems for many years. It’s such a great system, not only is it easy and swift to install, but it also leaves a great all round finish, with very impressive security benefits”.

Specifiers for the Priory Federation of Academies were so impressed with Metrotile Lightweight Roofing that the system has been chosen for a new phase, due for completion in 2012.

For more information regarding Metrotile and education building projects, click here.  For further information about Metrotile Lightweight Roofing, visit our contact page. To download from our library of informative documentation and certifications, click here. 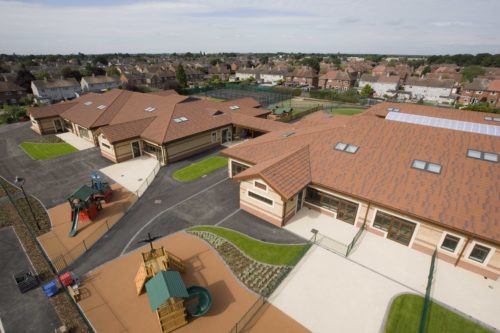 From our highly durable lightweight steel roofing tile profiles to underlay, accessories and fixings, you’ll find everything your roofing project needs right here. Metrotile is also an authorised dealer of Velux window products, ensuring that you can source absolutely everything your roof requires directly from us!

We stock our profiles with a wide range of colours designed to suit most roofing projects, however we can supply Metrotile roofing in any colour you choose (subject to additional delivery time). If you wish to discuss this - or anything else about our products and services - you can contact us.